This book will help people with mental health issues survive and come back to a normal life. The general public believes that drugs against depression and psychosis and admission to a psychiatric ward are more often harmful than beneficial, and this is also what the science shows. Even so, most people continue taking psychiatric drugs for many years. This is mainly because they have developed drug dependence. The psychiatrists and other doctors have made hundreds of millions of people dependent on psychiatric drugs and yet have done virtually nothing to find out how to help them come off them safely again, which can be very difficult. The book explains in detail how harmful psychiatric drugs are and tells people how they can withdraw safely from them. It also advises about how people with mental health issues may avoid becoming psychiatric “career” patients and lose 10 or 15 years of their life to psychiatry.

2) go to my GoFundMe account, donate DKK150 and write to me via this homepage and give me your email address.

The book has also appeared in Danish, French, Portuguese and Spanish, and will appear in Dutch, German, Greek, Icelandic and Swedish. Volunteers have translated it into French, Spanish and Portuguese, and I have made it freely available in these languages (see http://depsychiatriser.blogspot.com/, https://madinbrasil.org and http://www.nogracias.org). It will also become freely available in English, on https://www.madinamerica.com/. 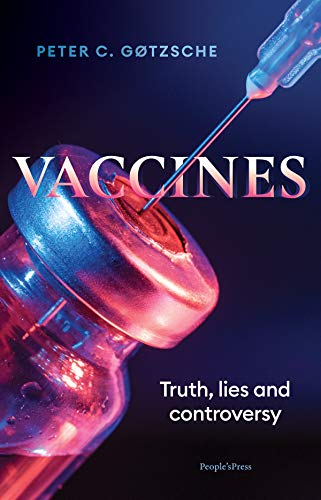 This book will help you navigate in the bewildering and often contradictory flood of information about vaccines.

There is substantial misinformation about vaccines on the Internet, particularly from those who reject all vaccines, but also from official sources, which are expected to be neutral and objective. The book is based on the best available evidence, and Professor Gøtzsche explains when and why we should not have confidence in the science and official recommendations.

Some vaccines are so beneficial – and have saved millions of lives – that we should all get them; some are so poor that many healthcare professionals do not use them for themselves or their families; and some are in-between.

We must evaluate carefully each vaccine, one by one, assessing the balance between its benefits and harms, just as we do for other drugs, and then form an opinion about whether we think the vaccine is worth getting or recommending to other people.

The book focuses on measles, influenza and HPV but discusses also childhood vaccination programmes and whether mandatory vaccination can be justified. Raising critical questions to vaccines is essential because there are still many unresolved issues. For example, we know virtually nothing about what happens when we use many vaccines and what the long-term effects are on the immune system.

English original can be bought here. The book has also appeared in Danish and will appear in Dutch, French, Italian, Spanish and Swedish. 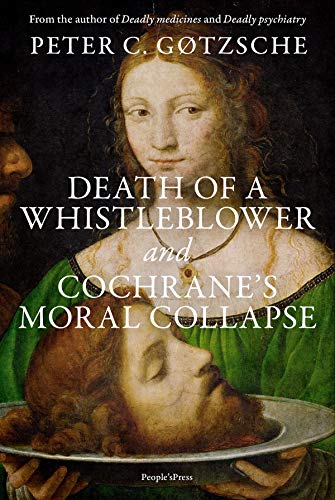 Death of a whistleblower and Cochrane’s moral collapse (2019)

Professor Peter C. Gøtzsche co-founded the Cochrane Collaboration in 1993 and has become one of the most respected academics of his time. His career has exposed malfeasance in the pharmaceutical industry, human clinical trials and drug regulatory agencies, empowering Cochrane to evolve into one of the world’s most trusted scientific institutions. However, in September 2018, he was unceremoniously expelled after what can only be described as a show trial that left the rest of the world wondering what happened.

Gøtzsche fought to uphold Cochrane’s original values of transparency, rigorous science, free scientific debates, and collaboration. But instead of maintaining scientific integrity, Cochrane’s leadership had become consumed with managing the charity like a business, promoting its brand and products and demanding the censorship of dissenting views.

For the first time, Gøtzsche pulls back the covers on this unscrupulous process, giving us all access to secret recordings, which reveal how his own organisation betrayed him and mislead millions of people after Cochrane cowered to the threats and intimidation from his critics.

This is the fascinating story about institutional corruption in one of the world’s most venerated charities, which ultimately led to the worst show trial in academia you can imagine. Can be bought here. 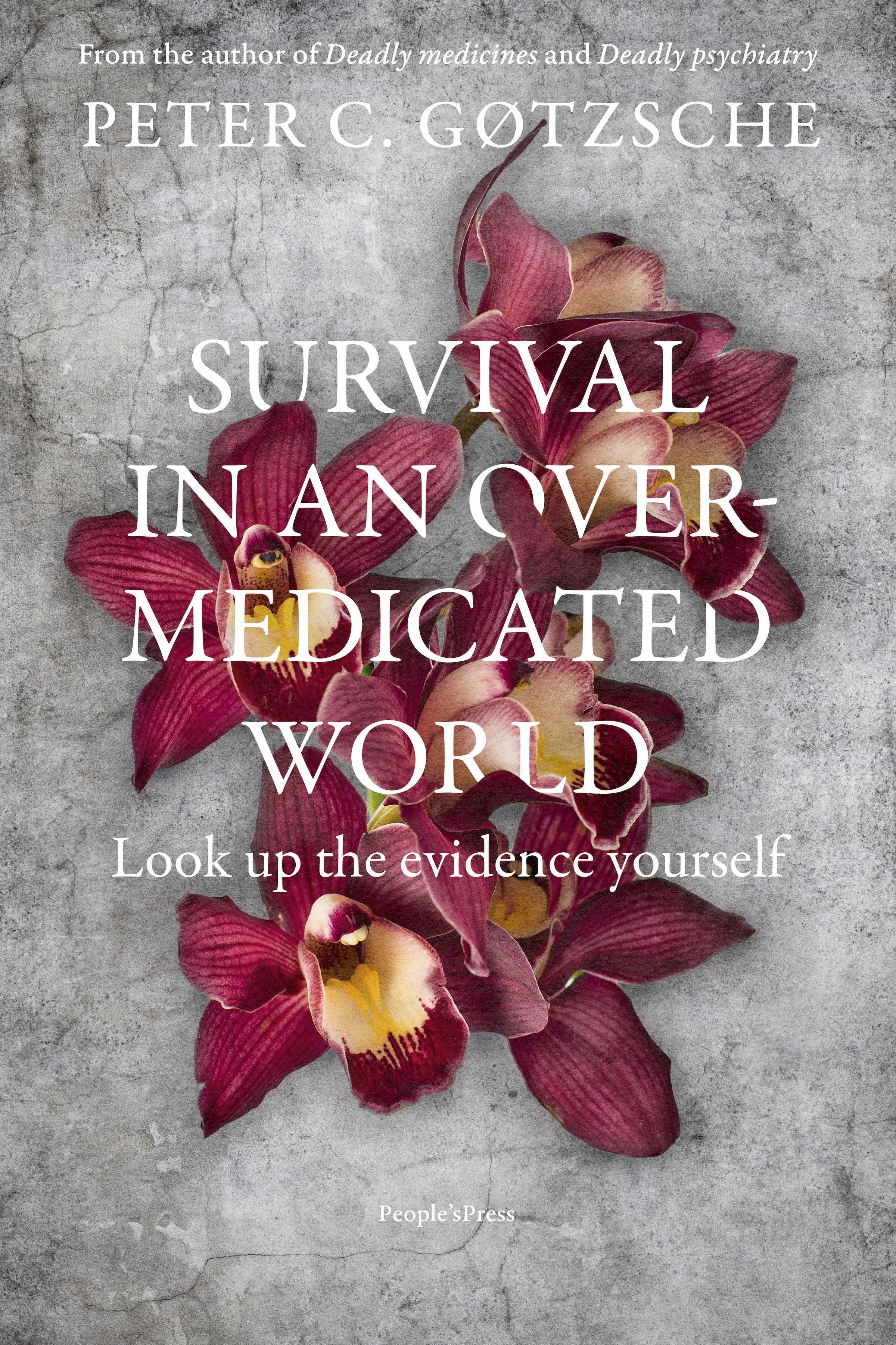 Survival in an overmedicated world (2019)

‘You do not ask a barber if you need a haircut.’ Most people have heard this expression or something similar. Yet we willingly allow our doctors to subject us to various diagnostic investigations and treatments which may be financially beneficial for themselves. Healthcare is riddled with financial conflicts of interest, and even when your doctor does not directly benefit, there are many other reasons you should be on the alert. In good faith, doctors use many treatments which do not work, and since all treatments will cause harm to some patients, doctors do harm to many people.

Therefore, you must look up evidence in order to protect yourself against being harmed. Harm is usually caused by drugs but can also be caused by, for instance, infections, surgeries, Chinese herbs, electroshock, diagnostic testing, and admission to hospitals – dangerous places because of the many errors made there.

This book is intended to be a self-help guide to finding the most reliable evidence about diagnostic methods and healthcare treatments. It is written for everyone, even doctors and other health professionals who, like patients, can feel lost when looking for answers to the most pertinent questions on the Internet.

English original can be bought here. The book has also appeared in Danish, Dutch, German, Italian, Spanish and Swedish. Will appear in Korean and Spanish.

This book explains in evidence-based detail why the way we currently use psychiatric drugs does far more harm than good. Professor Peter C. Gøtzsche documents that psychiatric drugs kill more than half a million people every year among those aged 65 and above in the United States and Europe. This makes psychiatric drugs the third leading cause of death, after heart disease and cancer. Gøtzsche explains that we could reduce our current usage of psychotropic drugs by 98% and at the same time improve patients’ mental and physical health and survival. It can be difficult, however, to come off the drugs, as many people become dependent on them. As the withdrawal symptoms can be severe, long-lasting and dangerous, slow tapering is usually necessary.

In his book, Gøtzsche debunks the many myths that leading psychiatrists – very often on drug industry payroll – have created and nurtured over decades in order to conceal the fact that biological psychiatry has generally been a failure. Biological psychiatry sees drugs as the “solution” for virtually all problems, in marked contrast to the patients’ views. Most patients don’t respond to the drugs they receive but, unfortunately, the psychiatrists’ frustrations over the lack of progress often lead to more diagnoses, more drugs and higher doses, harming the patients further. Read Chapter 1 here (English and Danish).

English original can be bought here. The book has also appeared in Danish, Dutch, Finnish, French, German, Italian, Norwegian, Spanish and Swedish. Will appear in Slovenian.

Prescription drugs are the third leading cause of death after heart disease and cancer. In his ground-breaking book, Peter C Gøtzsche exposes the pharmaceutical industries and their charade of fraudulent behaviour, both in research and marketing where the morally repugnant disregard for human lives is the norm. He convincingly draws close comparisons with the tobacco conglomerates, revealing the extraordinary truth behind efforts to confuse and distract the public and their politicians. The book addresses, in evidence-based detail, an extraordinary system failure caused by widespread crime, corruption, bribery and impotent drug regulation in need of radical reforms.

The main reason we take so many drugs is that drug companies don’t sell drugs, they sell lies about drugs. This is what makes drugs so different from anything else in life … Virtually everything we know about drugs is what the companies have chosen to tell us and our doctors … the reason patients trust their medicine is that they extrapolate the trust they have in their doctors into the medicines they prescribe. The patients don’t realise that, although their doctors may know a lot about diseases and human physiology and psychology, they know very, very little about drugs that hasn’t been carefully concocted and dressed up by the drug industry … If you don’t think the system is out of control, then please email me and explain why drugs are the third leading cause of death … If such a hugely lethal epidemic had been caused by a new bacterium or a virus, or even one hundredth of it, we would have done everything we could to get it under control.​

Gøtzsche exposes in his book the pharmaceutical industries and their charade of fraudulent behavior, both in research and marketing where the morally repugnant disregard for human lives is the norm. In this way, there is little difference to the tobacco conglomerates, which also succeeded to confuse and distract the public and their politicians for decades. The book addresses, in evidence-based detail with more than 900 references, an extraordinary system failure caused by widespread crime, corruption, bribery and impotent drug regulation in need of radical reforms. Gøtzsche suggest a number of such reforms and also what the patients can do under the current system to protect themselves against ineffective and lethal drugs. 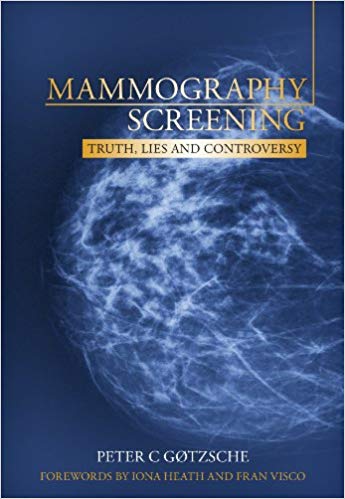 The most effective way to decrease women’s risk of becoming a breast cancer patient is to avoid attending screening. Mammography screening is one of the greatest controversies in healthcare, and the extent to which some scientists have sacrificed sound scientific principles in order to arrive at politically acceptable results in their research is extraordinary. In contrast, neutral observers increasingly find that the benefit has been much oversold and that the harms are much greater than previously believed. This groundbreaking book takes an evidence-based, critical look at the scientific disputes and the information provided to women by governments and cancer charities. It also explains why mammography screening is unlikely to be effective today. All health professionals and members of the public will find these revelations disturbingly illuminating. It will radically transform the way healthcare policy makers view mammography screening in the future.

“If Peter Gøtzsche did not exist, there would be a need to invent him … It may still take time for the limitations and harms of screening to be properly acknowledged and for women to be enabled to make adequately informed decisions. When this happens, it will be almost entirely due to the intellectual rigour and determination of Peter Gøtzsche.” From the Foreword by Iona Heath, President, RCGP.

“If you care about breast cancer, and we all should, you must read this book. Breast cancer is complex and we cannot afford to rely on the popular media, or on information from marketing campaigns from those who are invested in screening. We need to question and to understand. The story that Peter tells matters very much.” From the Foreword by Fran Visco, President, National Breast Cancer Coalition.

“This book gives plenty of examples of ad hominem attacks, intimidation, slander, threats of litigation, deception, dishonesty, lies and other violations of good scientific practice. For some years I kept a folder labeled Dishonesty in breast cancer screening on top of my filing cabinet, storing articles and letters to the editor that contained statements I knew were dishonest. Eventually I gave up on the idea of writing a paper about this collection, as the number of examples quickly exceeded what could be contained in a single article.” From the Introduction.

Can be bought here.