Bizarre events related to the Maudsley debate: ”This house believes that the long term use of psychiatric medications is causing more harm than good.” 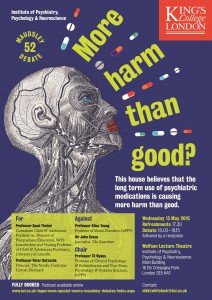 It also surprised many people that Cochrane’s CEO Mark Wilson – assisted by deputy CEO and Cochrane editor-in-chief David Tovey, and the two democratically elected co-chairs of the Cochrane Steering group, Lisa Bero and Jeremy Grimshaw – denigrated my writings about the harms of psychiatric drugs in March 2014 in response to a letter from the Danish Psychiatric Association. The Association was dissatisfied with a newspaper article I had published in January 2014 about ten harmful myths in psychiatry (which has been translated into several languages by people who liked it, including English) and with what I had written about psychiatry in my book, ”Deadly Medicines and Organised Crime: How big pharma has corrupted health care.”

I wasn’t given the opportunity to comment on the Cochrane leadership’s reply to the Danish psychiatrists, although I, in my capacity of being the director of the Nordic Cochrane Centre, represents Cochrane in Denmark. If I had seen the letter, I would have pointed out that it was dynamite that would explode in any journalist’s hands, which was exactly what happened (see my book, “Deadly Psychiatry and Organised Denial” for details). It came as no surprise to me that Danish journalists interpreted this letter as meaning that I had now come under Cochrane censorship and wouldn’t be allowed to publish anything unless it had been approved by Cochrane. This was bizarre and was of course not the intention with the letter.

The letter from Cochrane’s leadership was a threat to what I had built up over 30 years, including my centre, which is on government funding, and the newspaper that broke the story seriously misrepresented the letter. For example it wrote that, “the organisation doesn’t agree either with the views Peter Gøtzsche describes in his book where he compares the business model of the drug companies with criminal organizations.” This was free fantasy, and I didn’t present views in my book, I presented facts. An organisation like Cochrane is not entitled to disagree with facts like the fact that Pfizer, the world’s biggest drug company, has been convicted of organised crime and a conspiracy.

Cochrane cherishes openness, free debate and transparency. I feel it is in line with our core values that I now inform patients, their relatives and others about some bizarre events related to the Maudsley debate they would otherwise not have known about.

The two sides of the debate published a joint paper in the BMJ. The BMJ issued a press release on 9 May where our paper could be downloaded, which I did. This was the original version, but it quickly disappeared.

I immediately alerted the BMJ editors to the fact that psychiatrist and professor Allan Young – who participated in the Maudsley debate on the other side – had not declared his conflicts of interest in relation to the drug industry. Medical journals normally publish a correction alerting readers to the fact that an author has failed to declare his conflicts of interest, but this didn’t happen. Instead, the conflicts I had alerted the editors to were inserted into the paper. The amended version of the BMJ paper, which appeared on 12 May, is now the official one. The editors also replaced some data I had in my part of the joint paper with plain words, e.g. I wrote in the subheading of the paper that ”We could stop 98% of psychotropic drug use without deleterious effect” (which I have documented in my upcoming book), and this was changed into “We could stop almost all psychotropic drug use without deleterious effect.”

I sent the press release and the original version of the BMJ paper as a courtesy on 9 May to the editor-in-chief and deputy CEO of Cochrane, David Tovey, and to the editors of the Cochrane mental health groups. To my great surprise, Tovey and three of these editors published a rapid response to my paper on 12 May, the day before the Maudsley debate, where they tried to denigrate my research and position at the debate, which is that long term use of psychiatric medications is causing more harm than good. This response was originally dated 12 May but if downloaded today, the date is 13 May, the day of the Maudsley debate, which is a curious and unexplained change of date.

I explained in a letter to David Tovey, Mark Wilson, and Julie Wood, Head of External Affairs and Communications, Cochrane Central Executive, the damage the editors had caused with their rapid response, which some people interpreted as an attempt at protecting psychiatry’s guild interests rather than protecting the patients whose views on psychiatric drug are in sharp contrast to the views of the psychiatrists but in close agreement with the science, as I explain both in my rapid reponse and in my psychiatry book. I had not intended to make my letter public, but because of the public interest in this affair, and considering the core Cochrane values, and the many curious events, I felt it was the right thing to do to put things out in the open for the public – Cochrane’s primary  constituency.

1 thought on “The Maudsley debate”